Rohit Shetty is a director who is not really known for reinventing the wheel. Or even knowing what to do with a wheel except blowing it up from three different angles. After the disastrous 'Dilwale', Shetty now returns to an older franchise, and tries to infuse something new with 'Golmaal Again'.

'Golmaal Again' features the same dynamics with a new twist and a new genre.

The 'Golmaal' franchise is basically about a group of dudes, who have ridiculous misadventures with a revolving door of mainstream actresses being swapped out with each film. The new movie is full of actors for whom this movie is the the only work they've gotten in a while. And unfortunately, that is also the case for the only lead actress in this, Parineeti Chopra.

While the movies make bank at the box office, they're mostly superfluous plots with most of the funny being provided through one liners and over the top performances by everyone involved. It's show and awe comedy, that rarely does either. Oh, and not to mention Shetty's patented action sequences involving cars that he gets overly emotional about. And 'Golmaal Again' doesn't look like it will provide anything different this time around.

Leading the pack in 'Golmaal Again' is Shetty's favourite muse, Ajay Devgn. After a string of flops, Devgn returns to this franchise, with the latest entry providing a horror twist to the proceedings as well. Devgn here is paired opposite Parineeti Chopra, and their age difference is the butt of a joke in the trailer as well. Not a good one though. Chopra doesn't seem to do anything special here, beyond look pretty. Which makes me sad, given how talented the actress is. If only she'd work on her self esteem issues, and make better career decisions.

The 'Golmaal Again' trailer is full of ridiculous car shots, with bright colors and CGI sequences that is not even worth the migraine from the serial eye rolls it invokes. However, the ghost and horror elements are a little reminiscent of 'Bhool Bhulaiya', but not looking anywhere near as creative or fun as that film. 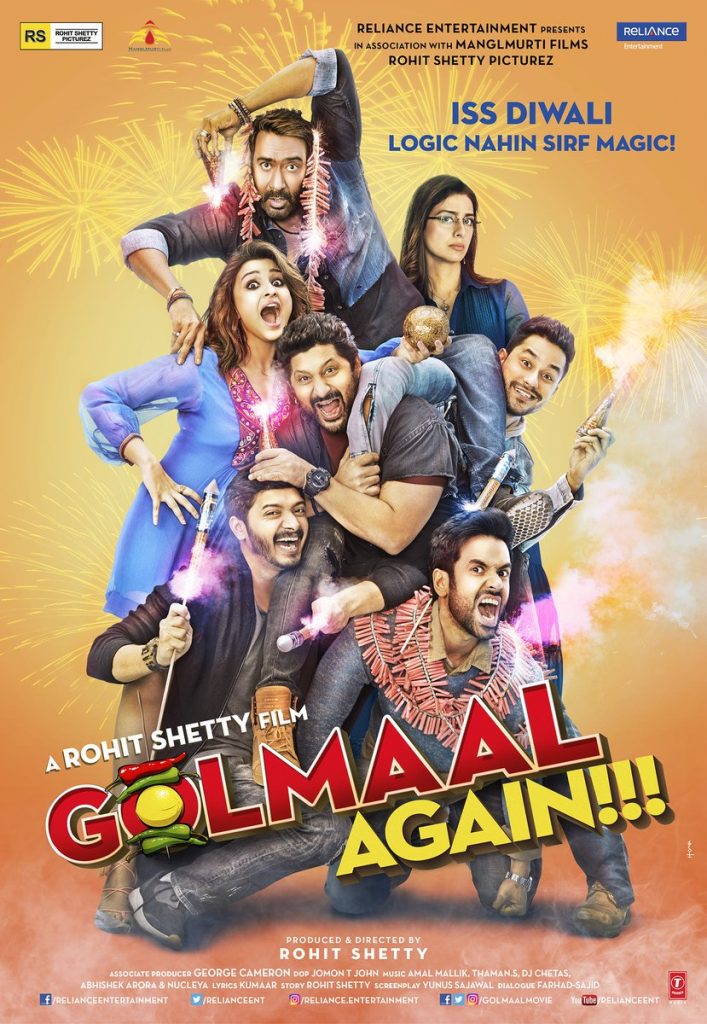 The only takeaway from this trailer is that Parineeti definitely deserves better. While it may seem like a good career move to be part of a commercially successful franchise, it's a waste of her talents to be the only woman in a massively male cast that consists of B-list actors who are only able to be in a movie as part of an ensemble. Especially when she isn't given anything to do here but, be the girl. Her pairing opposite Devgn is also wierd and odd-looking.

Oh, and Neil Nitin Mukesh makes an appearance in the trailer as well. The significance of his role (if any) is undetermined. The only performance that doesn't seem ridiculous is Shreyas Talpade's accent.

One of the best parts of the trailer, is when the makers seems to completely accept the biggest criticisms towards Rohit Shetty films. There is a scene where CGI text appears proclaiming 'No Logic'. There really isn't much more that needs to be said after that.